On most measures, gold is a spectacularly useless investment. It doesn’t pay dividends or interest. It doesn’t generate any cashflow. Quite the opposite: it even costs you money to store.

The most common justification for investing in gold despite this is that it’s a hedge against inflation. But if you look at its record, that’s only partly true.

The chart below shows the subsequent one-year change in the US dollar gold price versus the one-year change in US CPI, calculated for every month since 1970. (The reason for beginning in 1970 is that the next year the Bretton Woods system of fixed exchange rates began to break down and currencies floated freely against each other and against gold. Before then, the dollar was pegged to gold, so the gold price didn’t change.) 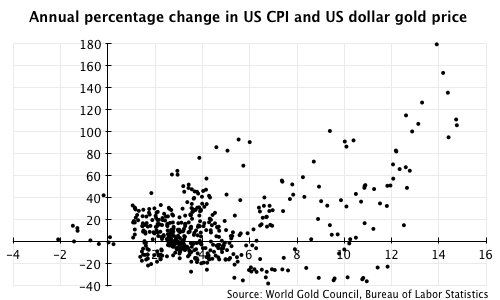 As you can see, the evidence isn’t too impressive. An r-squared value of 0.17 indicates a relatively weak relationship and that’s born out by the chart; overall, you might conclude that there’s a tendency for gold to perform better during high inflation, but it’s not a reliable trend.

However, if you look towards the right hand side of the chart, there may be some evidence that gold does exceptionally well when inflation is higher. It may have been a poor hedge when inflation runs at 5%, but seems to be better above, say, 10%.

This seems to be born out if you look at longer-term returns. Over five years, the series seems to splinter; average gold returns have been noticeably higher when average inflation runs above 6% than when inflation is lower. 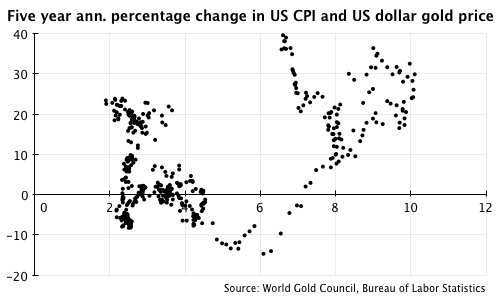 That said, gold is not the only asset that has some inflation protection. The S&P500 has not performed as consistently badly during high inflation as some investors think, but share prices certainly haven’t shown any consistent ability to keep up with inflation … 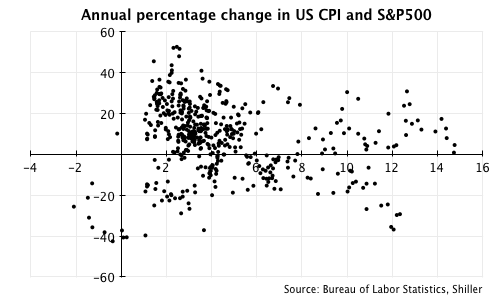 … but dividends are another matter. The growth rate in dividends shows a relationship with inflation that’s as least as consistent as gold. 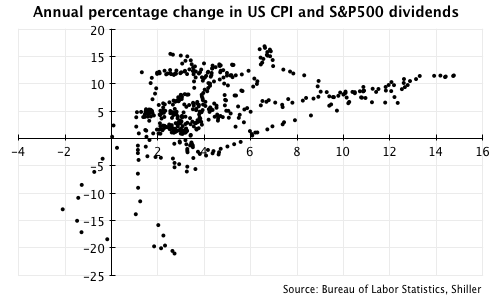 The notable points about this are a) that dividend growth rates clearly tended to lag inflation when inflation was above 8% and b) that dividends generally rise, but sometimes fall very substantially. And this is where gold can help add some protection to a portfolio.

If inflation is very high, dividends will lag, but gold may be able deliver outsized returns (see the first chart), helping to offset this. (Investors can also improve their position here further by buying not just high-yield stocks, but stocks with strong pricing power. The earnings and dividends of these companies should be able to keep pace with inflation much better.)

The second situation reflects situations where there is a recession or crisis. Here, you want an asset that is uncorrelated or negatively correlated with the economy. And as a safe haven, gold has often fulfilled that role.

As a simple inflation hedge, gold has been useless. Buying it now to protect against 4-6% inflation over the next few years is a bad idea; good quality income stocks make much more sense. But as a way to hedge that portfolio against extreme events, there’s a lot more going for it.