As an investor, you either “get” tech or you don’t. Either it’s a source of glamour and outsized potential returns or hype and eventual disappointment. There doesn’t seem to be much middle ground.

Taiwan’s HTC is presently doing its best to satisfy both schools of thought. Shares in the smartphone maker staged a classic tech takeoff in 2010 – and have spent the second half of 2011 crashing back to earth. 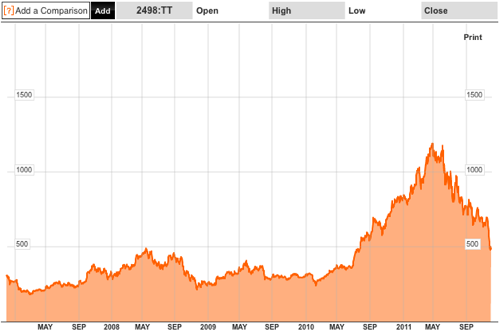 The firm wasn’t completely alone in this – like most cyclical markets, Taiwan has performed poorly this year. But of late HTC has done worse than most peers – its down about 43% year-to-date against 22% for the Taiex.

The reason investors that have been bailing out is a pretty good example of why many distrust tech investments. This is an extremely fast-moving industry, both in terms of tastes and technology. What was going to be cutting-edge can become outdated before it’s even properly commercialized.

As smartphones took off in the last two-three years, HTC managed a breakthrough in marketing. From being a capable but unglamorous maker of Windows Mobile smartphones, it became a consumer brand in Android phones with some very successful products in 2009-2010.

But taste and technology move on quickly and HTC’s more recent launches simply haven’t grabbed consumers in the same way as Samsung has. Given that a year or so ago, HTC’s smartphones were seen as noticeably slicker than Samsung’s in terms of user experience, it shows how quickly leadership can shift if a company missteps.

The dangers of a fast-changing industry don’t just apply to consumer facing firms. Take DRAM manufacturers. Commodity memory is an industry always blighted by cycles of overinvestment and capacity gluts and seems to be following its familiar pattern again.

Manufacturers ramped up capacity in the expectation that demand for notebook memory would keep increasing. But the success of the iPad threatens to slash DRAM demand  – tablets currently use substantially less memory than full-featured laptops.

In HTC’s case, it may be able to stage a comeback with next year’s models – or it may join Blackberry maker RIM and LG Electronics as examples of smartphone makers that burned very brightly before burning out quicker than investors expected. (HTC and other smartphone makers also face an additional problem from overly broad software patents and patent trolls, which is forcing firms to spend more and more on legal action – against each other and third parties – and less on actually innovating.)

In the case of cyclical businesses like DRAM, there’s no hope. They will continue to ramp up in the good times and suffer in the bad, because that’s the nature of commodity business blighted with too many poorly managed firms such as Hynix.

So how do you think about investing in tech? Perhaps the answer may be that you generally don’t invest – you trade.

You trade a stock like HTC on the basis of how consumers are responding to its products. You buy if it seems tastes are swinging in its favour. Then you try to sell before they shift. You generally do not think about holding through the cycle.

When it comes to something like DRAM, you buy at the trough when demand is down, supply too high and nobody wants to touch these stocks. You sell when supply and demand have come back into balance and the firms are (probably briefly) making good profits again. You definitely do not hold through the cycle.

The only kind of tech that you might invest in for the long run are those that are more isolated from these kinds of pressures. That means they operate in a business that has high barriers to entry: typically, these firms have dominant positions in their market and they control large amounts of important intellectual property.

On the hardware side, that leads you towards stocks such as Intel and Taiwan Semiconductor Manufacturing Company (TSMC). Intel obviously is a word leader in designing and fabricating its own chips. TSMC is the leading independent foundry, fabricating chips for companies for firms that don’t have their own manufacturing facilities.

On the software side, it favours firms such as Microsoft, SAP and Oracle. Much of the software that these firms sell to companies has a dominant market position and would be extremely hard to dislodge.

Obviously, these firms aren’t immune to competition and the need to keep investing and innovating. But they are in a different position to one that markets to consumers whose tastes can shift almost overnight or sells commodity products into an oversupplied market.

Notably, these are relatively dull firms. Many tech investors like the thrill of the new and prefer to buy into more exciting brands with a growth story. But as is often the case, the less exciting firms may be the better long-run bet.