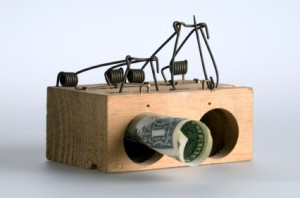 These rules were originally brought in to stop investors reducing their income tax by rolling the income up in an offshore fund and taking it as a capital gain. Since capital gains tax rates are usually lower than income tax rates, doing this could save a lot of tax.

So the authorities cracked down. Unfortunately the rules are very broad and catch many investors who simply want to invest in a fund abroad because an equivalent fund isn’t available at home.

The result is that foreign funds are usually very unattractive for US investors, because the tax penalties can wipe out any gain. For UK investors, the situation isn’t quite so bad – but they should stick to foreign funds with a special tax status where possible. Let’s look at the details for both.

US investors should avoid foreign funds

For US investors, it’s very simple. An offshore fund will usually be classified as passive foreign investment company (PFIC) by the IRS. Offshore means any foreign fund – not just one domiciled in a tax haven, as some investors might initially think.

Under the relevant law, an investor will have both income and capital gains taxed at the higher income tax rate. That’s bad enough. But the real problem is that the proportion of capital gains that are deemed to be deferred income from previous years will increased by an further interest charge for previous underpayment of tax.

For a long-term investment in a foreign fund, the penalty interest charge can increase the tax enough to wipe out all the profit. Obviously, this means that investing in offshore funds can be a very bad idea from a tax point of view for US investors.

It is possible to avoid the punitive roll-up of interest by making a qualified electing fund (QEF) election or a mark to market election (the former is more tax-favourable, but requires the fund to provide details of its income and capital gains for the year). But it’s simpler and usually more cost effective for US investors to avoid foreign funds and invest in US mutual funds that hold foreign assets or buy the foreign shares directly.

Stick to funds with distributor or reporting status

UK investors are slightly more fortunate. If you invest in an offshore funds that has not applied for distributor or reporting status with HMRC, you will again have capital gains taxed at the higher income tax rate rather than the capital gains tax rate (see explanation [PDF] and the legislation). But at least there’s no deferred tax penalty.

However, at current tax rates, that’s still a big hit for higher rate taxpayers. An offshore fund would have to do more than 10% better than a similar UK-based fund to be worth buying once tax is taken into account.

For basic rate taxpayers, the 2% difference may be acceptable. But be aware that you won’t be able to use the annual capital gains tax allowance or offset any losses against gains made elsewhere. And be careful that any gain won’t tip you over into being a higher rate taxpayer.

However, an investment in offshore funds that have distributor or reporting status will have any gains taxed at the usual capital gains tax rates. Essentially, “distributor” means that either they distribute a minimum level of their income (85%) to investors each year. “Reporting” means that they report all their income to HMRC and investors will be taxed on their share of the reported income, even if it hasn’t been distributed.

Offshore funds that are marketed to UK investors will usually have distributor or reporting status, although you should always check. Either ask the fund management firm or consult HMRC’s lists of distributing and reporting funds (you need to scroll down to find the relevant sections). Most foreign funds don’t target UK investors and won’t bother to go through this process, but some do.

You may be able to avoid this problem by holding funds in a tax-free wrapper. Self-Invested Personal Pensions (SIPPs) can hold offshore funds, although not all SIPP providers will let you do so. Individual Savings Accounts (ISAs) cannot hold most foreign funds (including foreign ETFs), although there are some exceptions.