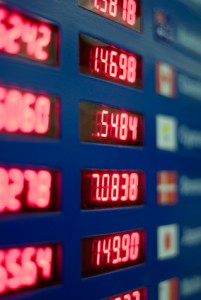 Investors often scrutinise a stockbroker’s trading commissions very closely, but don’t think hard about other costs. That’s a huge mistake. You can end up paying a great deal more than trading fees when you’re investing in foreign shares.

One of the biggest yet best-hidden costs are foreign exchange conversion costs. By that, I mean how much it costs you to buy foreign currency when your stockbroker settles a foreign share trade. Or what your bank charges to convert money and wire it to your overseas brokerage account.

In theory, these costs should be very low. Currency markets are highly liquid. The bid/ask spread in the interbank currency market is almost non-existent for major currencies. But financial institutions often stick a large margin on this when dealing with retail clients, figuring that most people don’t know what’s going on.

So it’s useful to know that FX costs can sometimes be cut dramatically by bypassing your stockbroker. Let’s take a look at how you might be able to get a fairer rate.

Your broker could be costing you 3% per trade

There are three ways in which you and your stockbroker might settle an order for foreign shares. Let’s summarise them quickly, using an example of a British investor buying French shares:

In the first two examples, you have no control over the exchange rate used. It’s what the market maker quotes or what your broker uses internally. You can’t do anything about that. But when your broker uses the third method,  you can sometimes get a better deal.

The first thing to do is to check what rate your broker offers on FX conversions within your account. Different brokers will quote you very different exchange rates. Let’s look at two stockbrokers, both with registered offices in the UK:

That TD Direct Investing fee is definitely expensive. The firm is advertising low headline trade rates for most markets, but clawing it back on FX. If you want to get the best deal from brokers like this, you need to cut those costs.

One option is to switch to a broker with lower FX charges. But perhaps you don’t want to do that because your current broker offers something that it’s hard to get anywhere else. So how else can you cut costs?

The good news is that if a stockbroker allows you to hold euros in your account and settle trades in euros, it will often allow you to transfer in money in euros rather than sterling. If you can do this, you can avoid paying the broker an excessive forex commission to convert the currency.

That’s great if you have a euro bank account – you can just transfer straight from that. But even if you don’t, you should still be able to make a sterling payment from your bank account, have it converted into euros and then paid into your stockbroking account as euros.

You won’t get the conversion done at interbank rates. You will still have to pay a premium. But depending on how much your broker charges, it could still be a significant lower premium than you’d pay if you were converting the money within your brokerage account.

You might think this is most easily done by asking your bank to do the currency conversion and transfer. But it probably won’t be. Yes, your bank will make payments in foreign currency. But it will usually charge a large premium to do so as well.

If you have a foreign brokerage account and you want to make a payment to it, the same usually applies. Say your broker is in Hong Kong and your bank is in London. The obvious way to fund the account is to get your bank to make a Hong Kong dollar transfer to your broker. But your bank probably won’t be offer a terribly competitive rate – and may try to hit you with a high international transfer fee as well.

So instead of using your bank to do the transfer, you’ll probably get a better deal from a currency broker (sometimes known as a foreign exchange transfer specialist) or a peer-to-peer (P2P) currency transfer platform. These firms specialise in forex transfers and offer much better rates than banks and most stockbrokers (for more details, see this article).

To do this, you need to open an account with a currency broker such as TorFX or HiFX , or a P2P platform such as Transferwise or CurrencyFair. Charges vary between different firms depending on the size of the transfer you’re planning and no single firm always offers the best value.

So it makes sense to get quotes from more than one firm and choose whichever gives the best rate for the currency and trade size you need. Account opening can usually be done online and completed in an hour or less. There are typically no account fees or maintenance fees, and you only pay a commission when you make a transfer. Smaller transfers can be done online, while dealing tens of thousands usually means speaking to a broker by phone.

Once you’ve got an account, you instruct the firm to purchase however much money you want and transfer to your receiving account (eg your stockbroker). You lock in the quoted exchange rate at that point and the broker takes the equivalent amount of sterling from your bank account or debit card. They purchase the required amount of foreign currency and forward it to the receiving account. Transfers typically take about 2-5 days to clear.

Note that while transferring money IN TO your brokerage account through a foreign exchange transfer firm is usually possible, transferring money back OUT via one is more difficult, at least in the UK. Most brokers reportedly say they are unable to send money via a third party due to money laundering regulations. So when you come to withdraw money again, your best options may be to:

The third option is certainly more hassle, but may be worth considering if you make large or frequent withdrawals in foreign currency.

If you end up having to use your stockbroker, be aware that there is occasionally scope for negotiation if you’re converting large amounts. I have heard of long-standing clients haggling their stockbroker down from 1%+ margins down to 0.25% for a £50,000 transfer, for example.

Will your transfer be accepted?

If you have an investment account that lets you hold foreign currency, you’d expect that you could transfer in funds in that currency. And certainly I’ve never had any problem with doing this. But I have heard stories of people who have.

The fund manager or broker has refused to accept transfers via a currency broker. Instead, it’s insisted that it comes from a personal bank account. As result, the client has had the choice of doing the conversion through his bank or through the institution he’s transferring the money to. In both cases, the rate would less competitive than a good FX firm.

If you’re cynical, you might conclude that some firms are putting up plausible-sounding barriers to transfers in an effort to continue pocketing excessive margins on doing the conversions themselves.

So if you run up against a financial firm that won’t let you use a transfer via a reputable, UK-regulated specialist, push for an explanation and check the FX rate they offer on conversions. And if they won’t budge and won’t cut you a better deal on the in-house exchange rate in compensation, you may want to shop around for another firm that will.

Hidden FX costs are one of the easiest ways for banks, brokers and fund managers to rip off unsuspecting clients. It’s in every investor’s advantage to call them on it.