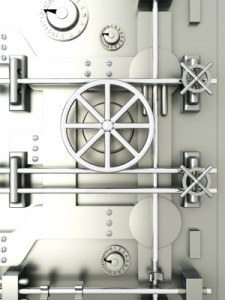 The ADR or GDR is essentially a certificate issued by a bank that gives the owner rights over a foreign share. It can be listed on a stock exchange and bought and sold just like a normal share.

The holder of an ADR or GDR is entitled to all benefits such as dividends and rights issues from the underlying shares. They are sometimes – but not always – able to vote.

As you might expect from the name, an ADR is listed in the US. A GDR is typically listed in London or Luxembourg. A depositary receipt where the issuing bank is European will sometimes be called a European Depositary Receipt (EDR), although this term is less common.

For a real example, let’s look at ICICI Bank. This stock is listed in India and isn’t available to most foreign investors.

However it has a depositary receipt issued in New York and traded on the New York stock exchange, which almost anyone can buy.

One ADR or GDR does not always equal one share of underlying stock. And with ICICI, the ADR actually represents two India-listed shares of ICICI and is priced accordingly.

This is quite common and is done so that the price of the ADR is typical for the market where it trades. Very low-priced shares may have each depositary receipt backed by several shares

For very high-priced ones, each depositary receipt represents a fractional claim on the underlying shares. For example, each Nintendo ADR in the US is worth one-eighth of a Nintendo share in Tokyo.

However, in some special cases this may not be true – for example, in cases where countries put limits on the maximum amount of a company’s shares that can be owned by foreign investors.

If that limit has already been reached, the ADR may trade at a persistent premium to the value of the underlying shares because it’s the only way that foreign buyers can buy into that company. One persistent example of this is HDFC Bank, another Indian bank with an ADR in New York.

The depositary bank that issues the ADR can charge a fee for the costs of holding on to the shares that back the ADR and doing all the paperwork. This is typically around US$0.01-0.03 per share per year.

Where the company pays dividends, this will usually be deducted from the dividend before that is paid on to the ADR holder. Where the company does not pay a dividend, the depositary bank will usually charge your broker who holds the ADRs on your behalf. The broker will then usually pass those fees onto you.

The US allows several different types of ADR. It’s important to know the difference, since they have different degrees of backing and support from the company you are investing in.

Unsponsored ADRs are issued without a formal agreement between the issuing bank and the foreign company – indeed, the company may have no desire to see its shares listed abroad at all. They trade on the over-the-counter market.

Sponsored ADRs fall into three categories. All are supported by the company, but with different levels of regulation.

Level I ADRs trade in the over the counter market. Reporting requirements are very low – the company does not need to issue any reports in the US or under US accounting standards. It must be listed on a foreign stock exchange and issue a report in English in that country under local accounting rules.

Level II ADRs can trade on a stockmarket such as NYSE or Nasdaq. The company must register with the Securities and Exchange Commission and issue annual reports in the US to US accounting standards.

Level III ADRs are used by companies that don’t simply want to float their shares abroad, but also to raise capital in the US market. Consequently, they are regulated to a similar standard to US companies. They must issue a offering prospectus, while all subsequent new releases made in their home market must also be issued in the US to US standards.

However, bear in mind that just because a company officially complies with US regulations, it does not mean that it as strongly regulated or as transparent as you might expect from a developed-market company. And the fact that a well-known accounting firm has signed off on the accounts is no guarantee that they are accurate, as many scandals have demonstrated.

The distinction between unsponsored and sponsored depositary receipts exists for markets outside the US. For example, in Germany a foreign company’s shares may be listed on the Berlin-Bremen exchange without its consent. The classification of sponsored ADRs into three levels is specific to US regulatory system.

How to buy ADRs and GDRs

You should be able to buy major ADRs and GDRs listed in your local market through your usual stock broker. There are stock brokers that won’t deal in any, but that’s unusual these days. However, especially with GDRs, not all discount brokers will offer less popular stocks, so in some cases you may need to call around to find a broker that will carry out the trade.

If you’re looking to see what ADRs and GDRs are available worldwide, you could search the listings in your local exchange or check the websites of any foreign companies that interest you.

However, not all ADRs and GDRs listed here are tradable by retail investors. In particular, there is an option in US securities law to issue shares that are intended only for certain investors and these are sometimes used for ADRs.

Rule 144-A shares are specifically only to be traded by institutions. Regulation S shares cannot be traded by any US person and are intended for non-US residents – in practice many are tradable by institutions only as well. (One popular trick among stock scammers and boiler rooms is to sell unwary investors Regulation S shares that have no active retail market and will be impossible to sell at anything except a knockdown price.)

The result is that many ADRs and GDRs are not listed on any stock exchange, are highly illiquid or are only traded in large blocks by institutions. So the amount of depositary receipts that are listed, liquid and tradable by retail investors is considerably less than the total outstanding stock of ADRs and GDRs.

In addition, investors should take great care when investing in unsponsored depositary receipts or any kind of unauthorised secondary listing of a foreign company. The liquidity of these instruments is often very poor and it has no official backing from the company.

What’s more, the ADR could be withdrawn at any time and you could be waiting for some considerable time before the depositary sells the shares and sends you the proceeds. And you may be hit with an unreasonably large administration fee in the process. While a sponsored ADR can also be withdrawn, it will typically be done in a more shareholder-friendly way than with an unsponsored ADR.

Hence, even though a stock may have an ADR or GDR it may not be possible or sensible to buy this. In general, only sponsored depositary receipts listed on a recognised stock exchange with reasonably liquidity are a sensible investment. In other cases, it may be best to investigate whether it’s possible to buy the shares directly on its domestic exchange.

However, there are a significant number of good quality companies available as ADRs and GDRs. They are an opportunity often overlooked by investors, so it’s always worth checking whether this may be the simplest way to invest in a company or country, especially if you have no desire to open brokerage accounts around the world.