Alea posted a striking table on the changing creditworthiness of sovereign bonds from the recent Moody’s report Sovereign Default and Recovery Rates, 1983-2010 [PDF, not Moodys.com because the site demands you register]. Over the last ~25 years, the number of sovereigns rated below investment grade has gone from zero to two-fifths of the total. 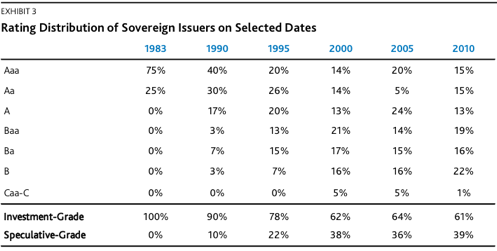 In fact, it’s a bit more complicated because as the Moody’s report notes, the universe of rated sovereign issuers has expanded dramatically in the same period. There were apparently 12 rated sovereigns in 1983 (which seems a bit on the low side) compared with 108 now. And much of that has come from an increase in the number of rated emerging markets, which will naturally have lower ratings on average.

But while that means we can’t simply conclude that sovereign credit quality is getting worse, there are definitely signs that the mix shifting. Another chart from the same report shows that the majority of upgrades in the last year have come in emerging market-dominated regions, while the majority of downgrades have come in Europe.

In other words, regions that would traditionally be seen as safer are deteriorating. And given that the credit rating agencies (along with other benchmarkers such as equity index compilers) seem to show some bias towards the old developed world over newer emerging markets, the deterioration is probably more marked than current ratings suggests.

In fact, there’s a nice example of the trend in two countries that Moody’s began rating in 1994. Greece and Indonesia both started off around Baa3 (the lowest investment grade rating). Today, Moody’s rates Greece Ca (in default) having been A1 as recently as December 2009.

On the other hand, Indonesia was downgraded during the Asian crisis – it didn’t technically default, but it rescheduled some Paris Club loans – and has never been investment grade since, going as low as B3 (substantial risks of default). But after several years in the wilderness, it’s on an improving trend and Moody’s now rates it rates it Ba1, just below investment grade and nine notches above Greece.